On our last trip to Kotra, the sun shone. On this occasion (end January), the sky was uncharacteristically overcast. Little did we know that it would rain heavily during the night. Such downpours occur once or twice during the winter but bring little relief to the local farmers whose struggle with the semi-arid conditions of southern Rajasthan is constant and the object of this field trip undertaken by Seva Mandir’s Natural Resource Development team. The goal is to explore, with the local community, opportunities for conserving monsoon rainwater, irrigating larger areas of local farmland and the best use of land so as to enhance the availability of water.

On the journey down, we pass local dwellings, 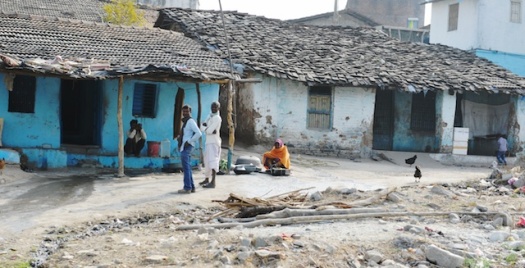 the occasional village and fields, some of which are dry

and others, which have benefited from irrigation, lush and green

with a variety of crops, including wheat and BT cotton, castor and lentils.  The local communities are poor but, from time to time, there are signs of investment in much needed agricultural machinery, including the occasional tractor.

On arriving in Kotra, we make our way to the local community which we visited on our previous trip to be shown the recently completed lift-well which enables more local farmers to irrigate a much greater area of their land and to increase their crop. The principle is that water is pumped from a local well to higher ground from which it can be used to irrigate land which would otherwise be impossible to cultivate.

The well is in good condition and the farmers proud of the new pump. 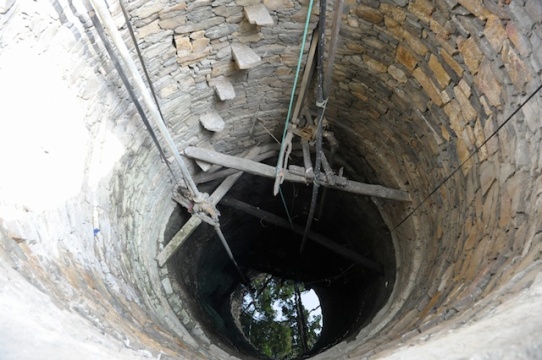 The first part of the day’s activities is to sit with leading members of the local community (men and women) to discuss water conservation and further irrigation.  There is a plenary meeting to outline the objectives and hear local input. 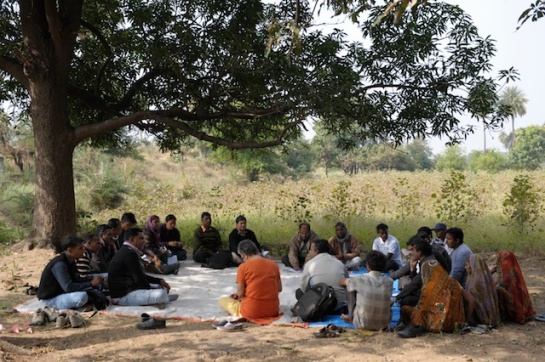 While they have representatives of Seva Mandir with them, the villagers are keen to learn of progress in providing them with Ecosan toilets (which use no water and turn solid waste into compost).  Seva Mandir has had great success rolling these out throughout southern Rajasthan, where 60-70% of families have no access to any kind of toilet. The farmers are also concerned that, whereas the lift-well used to provide water for six hours a day, now that the weather is drier the water is running out after only three hours, though the well does fill up again overnight. Work needs to be done on the system by which it fills up. A last point mentioned is the frustration at the lack of electricity in the village. It had taken two years for the electricity company to connect the lift-well (and even now the supply is irregular), but they did not connect the village at the same time. Whereas over the state border in Gujarat every remote rural shack has power, as can be seen by the pylons rising above the fields, the same is certainly not true in Rajasthan. This is all the more frustrating when the stark contrast is so visible.

After the plenary session, the NRD team splits into two groups. One team explores options for further expanding the area served by the lift-well and discusses with farmers plans to diversify agricultural activities so as to enhance the availability of water.

We join the other team exploring opportunities to conserve monsoon rainwater, which will involve repairing existing check dams, restoring drainage lines to channel water running off the hillsides and building a small dam in a riverbed so that water can be directed into nearby fields. Seva Mandir plans to work with farmers to strengthen the gravity flow of irrigation so as to save fuel and promote eco-friendly farming.

The initial exercise is to draw a map of the area. This is done as a group activity on bright yellow paper. Key points in the local landscape are plotted.

Once the basic details of the map have been completed, our team heads off to walk to the points of interest, starting with a drainage line which needs to be restored. Measuring and further mapping are undertaken. 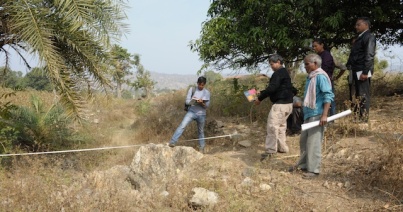 It is clear that local families desperately need more water.

We slowly climb up to the main road where additions are made to the map. 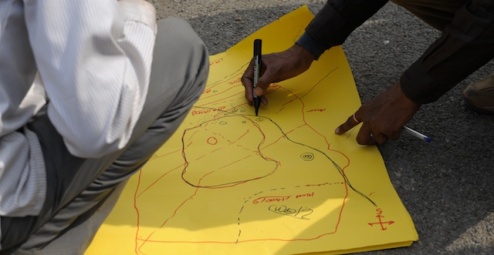 The possibility is explored of planting more trees to give some protection against soil erosion when the monsoon rains pour off the hillsides.

This part of Rajasthan borders Gujarat and there are any number of local Gujarati taxis carrying passengers wherever they can find a seat (or standing room).  One senior local prefers to walk. 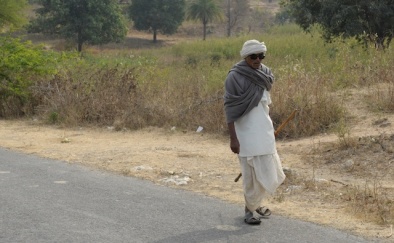 We proceed down the road past some wonderful banyan trees and local farm dwellings before making our way down to a riverbed, now largely dry but which is obviously an important source of water during and following the monsoon, thus supplementing irrigation from the lift-well. 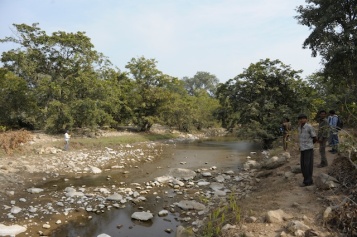 This is where a small dam will be built and the senior engineer explains to us that dams up to a certain size can be built without permission from the relevant government department. 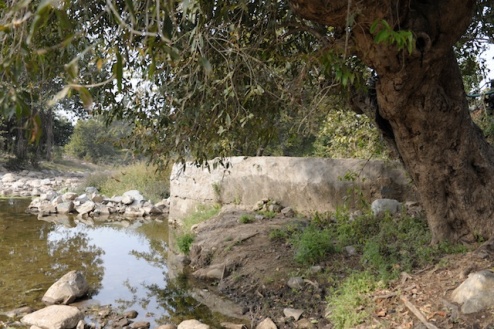 We also learn that, for the moment, no more water harvesting projects can be undertaken under the auspices of the Mahatma Gandhi National Rural Employment Guarantee Act (MGNREGA), India’s largest public employment programme, which guarantees employment via development activities prescribed by the Panchayats, the village-level elected government bodies which are very influential throughout rural India. So many water harvesting and irrigation projects have been built through this mechanism that there are now apparently more dams than teachers or hospital beds. But there was no supervision of site selection or construction of these projects, so most have proved useless. Alas, an all too common tale of a good idea implemented inefficiently.

Along the way, we inspect a pumping system which, when the water level is high enough, is used to irrigate adjacent fields. 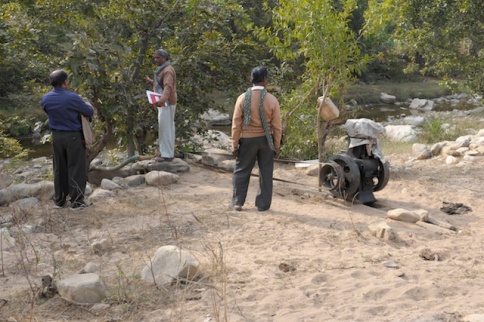 Leaving the riverbed, we make our way through fields planted with castor. The plant looks extremely prickly and we ask how it is harvested.  It transpires that the prickles are quite soft and that the crop is picked by hand. 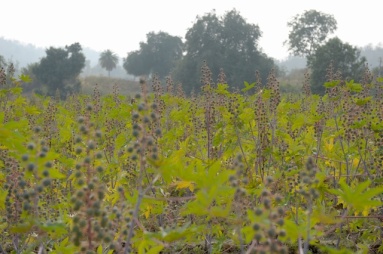 Castor oil is produced from the seeds, which look like this. 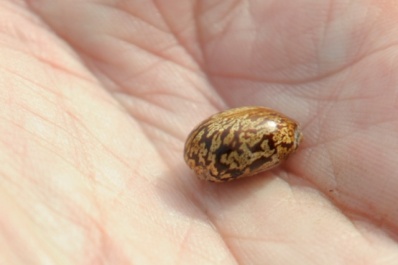 Further along, castor gives way to wheat and we can see evidence of lift-well irrigation as water flows down from higher to lower areas along channels which have been dug to provide direction. 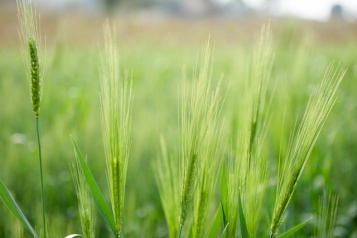 Our circuit takes us back to the meeting area and the teams convene again to complete the maps and summarise the activities which need to be undertaken.

After this exercise, by which time it is approaching mid-afternoon, our local hosts serve a well-earned meal in a delightfully decorated semi-enclosed terrace.  This is a good opportunity to practise our eating skills without utensils.

We then head back to the Seva Mandir ‘block’ office where we spend the night. 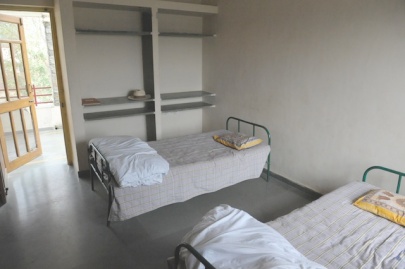 It has been a fascinating day and we look forward to a future visit to see the progress made.  Once again, this is a wonderful example of Seva Mandir working with local communities to assist them improve the conditions in which they seek to cultivate their land.

Overnight it rains and we spend an equally fascinating but very different morning the next day visiting Kotra town.  Our next blog will report on our experiences.