As we left Robin and Mary’s on that first evening to head to dinner, Robin had explained that the throng outside were mourners.  A neighbour in the small alley leading to their door had died and the nine days of mourning were almost over.  As we picked our way past the separate groups of women and men, the women seated mainly on thin green matting on the ground while some of the men were on chairs, we pressed the palms of our hands together, fingers pointing skyward in front of our chests, and exchanged ‘Namaste’, good day, with individuals.  There was a small temple a little way down the alley on the left which appeared to be a focal point for the mourners. Its doors were open to reveal a shrine reverberating in yellows and gold contrasting with the faded colours of the doors and walls of the alley outside.  Many of the mourners were still there when we returned from dinner.  By the next day, the numbers had dwindled and nine days of mourning were over.

To find the main street between Jagdish Temple, one of the city’s landmarks and an important place of Hindu worship, and the City Palace, which presides over both lake Pichola to the south 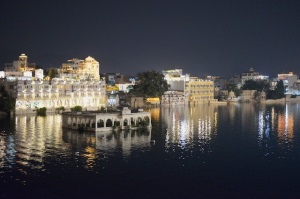 and the old city to the north, and the small band of tuktuk drivers based there, we climbed up steep steps and then made our way along a narrow alley parallel to the one on which Robin and Mary’s house is located, past the local dogs which have their own communities and take little notice of passers-by.

Here, there were a few small businesses, one exporting Rajasthani craftwork, its industrious owner dressed in western style, with white shirt and dark trousers, filling the doorway on ubiquitous cellphone.  Two doors along was the local dairy complete with milking cows which spend their days wandering along these tiny streets and are brought into a small courtyard at night.

When, if ever, they last saw anything resembling a green field, one can only speculate.  You see many cows living in the urban areas often ‘grazing’ on the plastic bags which are collected and dumped at specific points along the roads.  Local women buy some greenery in the morning from the roadside vegetable vendors and throw it down for the cows, but this offering is quickly devoured and the search amongst the plastic soon resumed.

On reaching the tuktuk drivers, there is a brief negotiation which results in a 60-Rupee (roughly 60 pence or 1 USD) put-your-hands-in-front-of-your-eyes-and-hope-for-the-best dash across town.  Udaipur was the location for the James Bond film Octopussy, still screened non-stop in local hotels and guesthouses.  Early on in the action, there is a famous tuktuk chase through the market streets of the old city with stalls overturned, bunting ripped down and trailed in the tuktuk’s wake and pedestrians scattered.  It is, however, a pale reflection of the real thing!  The tuktuk has one wheel at the front steered by handlebars on which the driver also operates the throttle and, very occasionally, the brakes; it is extraordinarily manoeuverable but, if you have not experienced this particular pleasure, you do not have this reassurance. Our previous close encounter with a tuktuk was in Pune earlier in the year and had resulted in what is known in aviation terminology as a ‘near miss’!  This time, we arrive in one piece, if slightly older than by the five minutes which the dash lasted.

The next few days were spent setting up the house.  (We are posting a separate account with more detail of these activities – see the first in our ‘Between the Lines’ posts.)

It is a very long time since we have equipped a dwelling from scratch.  Initially somewhat anxious about the availability of various key items, from fridges to loo brushes, we were soon visiting small retailers in Bapu Bazar as well as newer shopping malls with Indian supermarkets, like ‘Easyday’, which sell almost everything.  However, we had been advised by Mary not to buy fruit and veg in the supermarkets because the produce is not as fresh as that of the vendors. India has recently opened its doors also to international multiple retailers, like Walmart and Tesco, leaving it to the individual states, of which Rajasthan is one, to decide whether to accept them and, if so, how to regulate them.  The long debate leading to this decision highlighted the vulnerability of the smaller businesses, not to mention the street vendors and particularly those selling fruit and vegetables.  However, over 40%, if not more, of all agricultural produce in India is discarded as waste for the lack of refrigerated distribution and storage.  In a country in which malnutrition is still a huge problem, there are obvious potential benefits in the logistics systems of the experienced multiples.  How this revolution will play out and with what consequences for many aspects of traditional life in India, only time will tell – for now, we are grateful the service of the small retailers: ‘When can you deliver?’ ‘This afternoon!’

A number of you have asked about hurricane Phailin which hit the eastern coast of India, mainly the state of Orissa.  We were invited to dinner by our next door neighbour and were able to ask about developments and also catch some reports on one of the news channels.  Following a devastating hurricane in 1999 which killed 14,000 people in the same region, the state and national governments adopted a number of emergency measures in the hope of preventing a similar tragedy.  These included establishing a disaster recovery service and emergency shelters to accommodate those evacuated from their homes as a precautionary measure.  It appears that, in the case of Phailin, the forecasters were able to give five days’ warning, which enabled the authorities to evacuate 700,000 people, a truly staggering figure.

As of the last report we heard, there were only four reported deaths attributed to the hurricane.  The prevention efforts were aided by a decrease in the intensity of the hurricane and its relatively short duration.

Further inland, in the state of Bihar, heavy rain and strong winds caused some flooding and led to the cancellation of all flights.  One dinner guest reported that her mother’s plant pots had been blown over, but otherwise limited damage!

There is a political angle to all this.  Next year is election year in India.  Whilst the national parties, Congress and BJP, are well represented in many states, there are local parties which have regional strongholds.  Some of these can and do hold the balance of power in a country in which no single party is likely to secure sufficient votes to form a government on its own.  Coalition government is the norm here.  Accordingly, state governments and the parties which form them are anxious to do well not only to retain or secure power at the state level but also to have the possibility to influence the formation of the national government.  As the plaudits pour in for the preventative actions taken in Orissa and also Andhra Pradesh, these state governments are basking in the glory of a job well done – at least according to the reports we have seen.

Here, in Rajasthan, on the north west side of India (please see the map below), we experienced some torrential downpours last week, but understand that this was the end of the monsoon rains.  The monsoon started earlier and finished (if it is finished) later this year than usual.  It will be interesting to see the effects in the rural areas of semi-arid southern Rajasthan which we will start to visit again shortly with Seva Mandir, the Indian NGO which we will be supporting while we are here.

We thought it might be helpful to have two categories for our posts.  Those in this series are called ‘India At Large’ and those which provide more detail of specific activities and experiences for those thirsty for more ‘Between The Lines’.